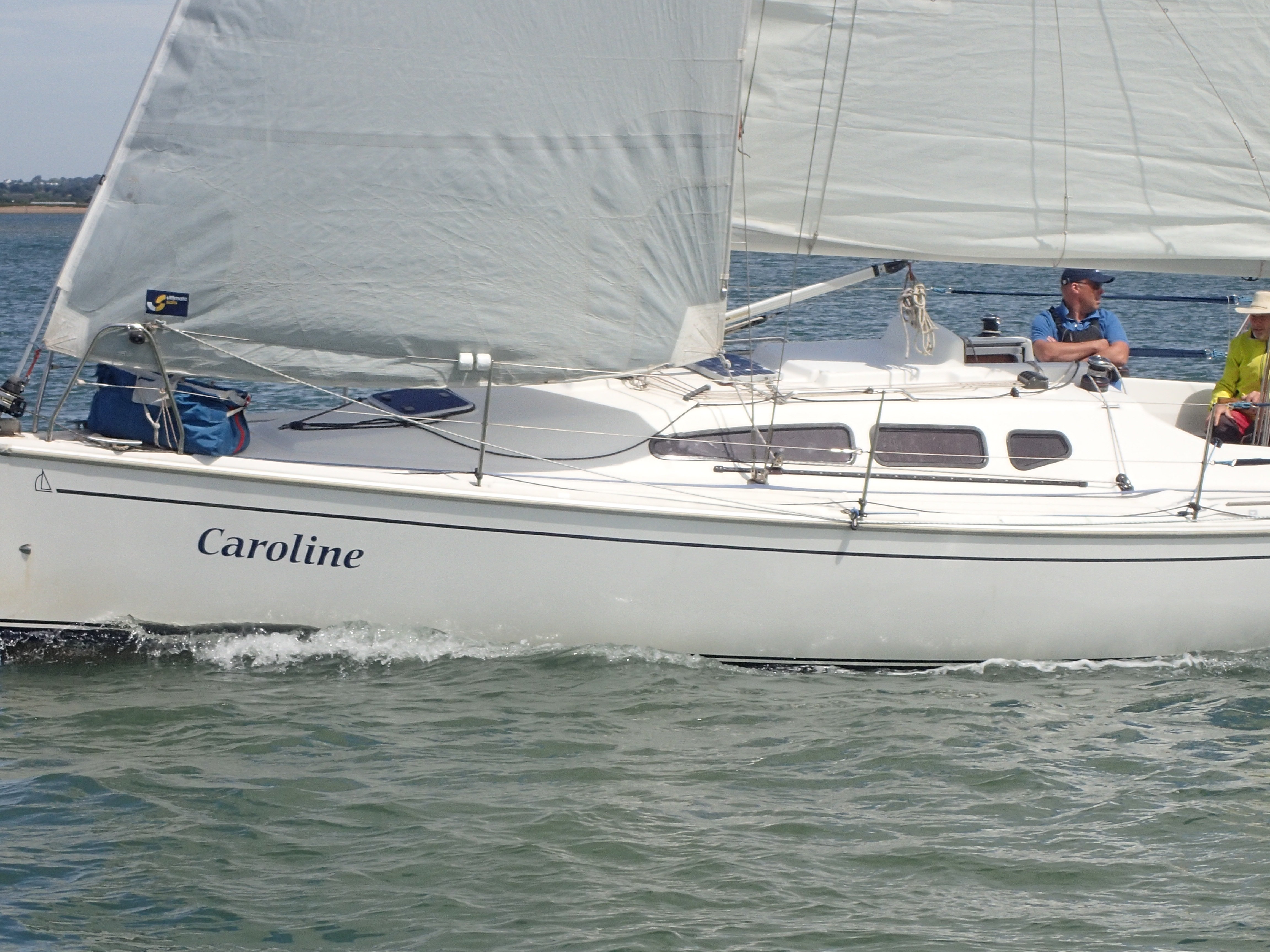 A 9.00 am start and a large fleet of 21 BJRC racers lined up at the Osea Line for the BSC Krohn Cup — Race 8 in the BJRC series

As so often happens, the wind forecast of 15-20kts looked unlikely as 25-30kts were already blowing at the Osea line with crews selecting No3s and pulling in reefs.

Race officer Don Baines wisely chose a clear run to the Bench Head via No3 and No1, followed by a couple of loops around the Bar and Inner Bench Head.

Dramas started to unfold even before the start……
Ned Kelly were late to the start after chasing their drifting tender down the river!
Soprano could not get their No3 hoisted, followed by a demonstration of mooring to the Osea Pier using only their spinnaker halyard!  They started 5 mins late but made up for this with a strong performance and 3rd place finish

A very short line and 30kt gusts mean that most competitors were cautious at the start, with most skippers happy with main and No3 jib only.
Geronimo, Caroline and Dan Dare all got excellent starts.

Geronimo was the first to throw caution to the wind, and go for a spinnaker lift amid shouts from Tommy Mills of “are we racing or cruising”?!! A brave choice, as the fleet watched them broaching several times and pinned down at 90 degrees until they got things under control!
It looked bit like this…… 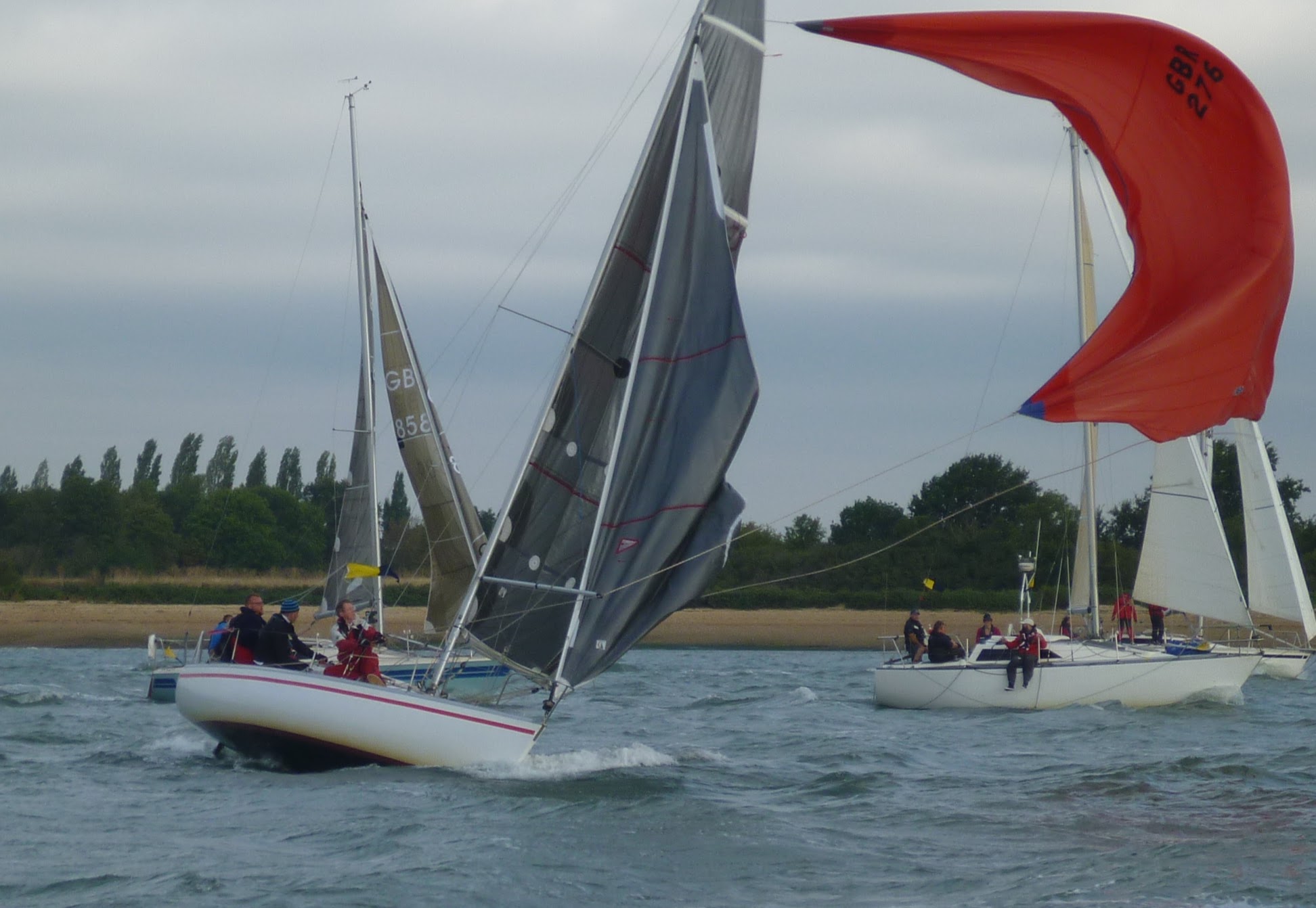 A strong tide and 25-30kts of wind saw the fleet blasting down to Thirslet, with peer pressure forcing more and more spinnaker lifts.
Caroline was in her element and saw 10.5kts over the ground.

Rocket managed to sail directly to No3 by sailing by the lee and made significant gains over those choosing a couple of tricky spinnaker gybes from the Bradwell shore.

Most boats reached from No1 to Bench Head. Poohsticks used their asymmetric but came close to losing their mast as the masthead fitting fractured and released the back stay plus main halyard. With good crew work, they managed to get the boat under control and motor home in one piece

By the Colne Bar, Caroline was into her stride and Crazy Suzy had used her asymmetric to get past Geronimo.

Crews were working hard to pull in reefs on the fetch to Inner Bench. All the 25.7s, Moon Shadow and Blue Moon going well in the second group.

With the tide turning on the second beat to Bench Head the wind started to throw up a short sea chop giving an advantage to narrower beamed boats. Evolution, Triton, Monkey Business and McGregor III gained places, with Ned Kelly having her best performance of the season.

With no one caught by a tide gate, there was some very close racing, all boats finishing in just over an hour on the water and 30 minutes on corrected time.

It says something about the quality of skippers and crews in the BJRC series that all boats competed hard and got home safe in winds occasional gushing up to 33kts.  Well done everyone!

First 3 boats in BJRC fleet were:

In the BJRC class, Evolution discarded 5 points to take the lead by 3 points in the series over Rocket
Only Rocket or Geronimo are left as BJRC series challengers to Evolution in the final race of the season

In the IRC class, Evolution, moved 3 points ahead of Monkey Business, and looks set to win the IRC series unless Monkey can win the final race