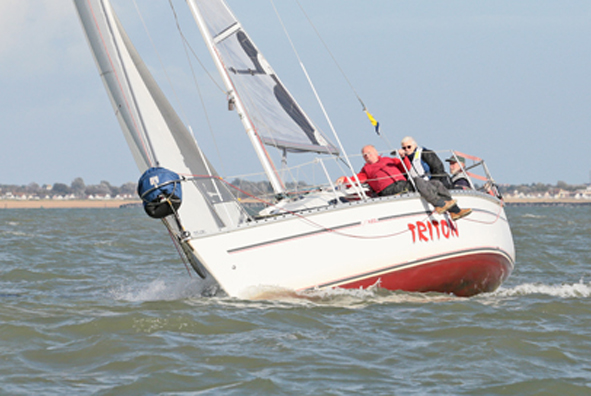 A light Easterly wind and a strong ebbing tide meant that most competitors were unable to stem the tide under sail and stayed well uptide of the start line.  A few boats kedged at the start but not without incident, as Sophie dragged over McGregor III’s anchor and several boats were over 3 minutes late to the start

With the prospect of some sea breeze, race officer Trevor Holder set a course to the Bench Head as fast as possible via No1, followed by 2 loops to North Eagle.

From the Marconi to the Bradwell was a drifting match with the fleet very compressed and everyone searching for wind pockets and the best tide.

Both Northern and Southern shores dealt large areas of no wind, and those choosing a mid course generally faired better until the wind started to fill past Bradwell.

As expected, Geronimo, Barcarol, and Monkey Business led the fleet as everyone tacked up to the Bench Head. Gains were made by those available to take advantage of the significant wind shifts.

2 fetches to North Eagle, saw an impressive performance by Triton and Blue Moon. Easy Rider and McGregor III seemed locked together in a covering battle for much of the race

Rocket just made the tide gate at North Eagle but the chasing 7 boats were heavily impacted by the incoming tide.  Perhaps something that needs to be addressed for the last 2 races of the season.

From Bench Head to home saw spinnakers up all the way, and no significant changes of position.

In the BJRC class both Triton and Blue Moon had their best performances of the season. Evolution managed a big discard and moved up to second on the series leader board.

In the IRC class, a first place by Evolution, moved them 2 points ahead of Monkey Business in the series results

Series Update
BJRC
Only 3 points separate Rocket, Evolution and Gernonimo.  However, with all 3 boats being penalised for the next race, and some significant discards, anyone in the top 7 places could win the series

IRC
Evolution and Monkey Business look like the main contenders for the IRC series trophy. However, Monkey Business still has a 4th place to discard, so it will go the wire!