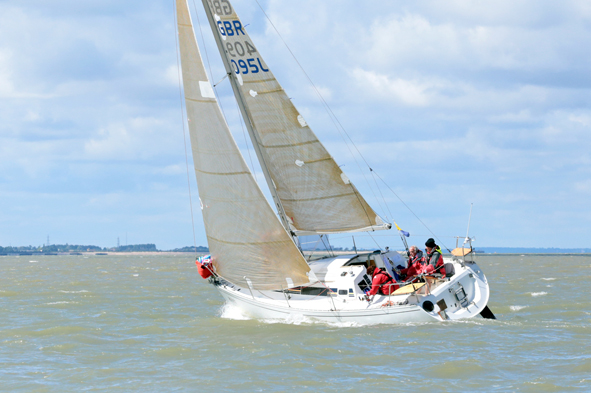 Warm and sunny conditions met the 18 starters as they came to the Stone line for the Stone Bowl for the 5th race in the BJRC series.
Unfortunately, Caroline missed the start after snagging a mooring line, requiring them to dive under the boat to free themselves

With initially light winds, and a beat out to the Bench Head, race officer Wendy Robinson set a short estuary course with 2 loops of the NWK and North Eagle

It was a windward start once again with Geronimo, Ned Kelly, Monkey Business and Carolanti finding themselves OCS at the start with a difficult return against the tide. Ned Kelly losing significant time on the return
This gave advantage to McGregor III, closely chased down by Blue Moon and Aloha, who all got clean fast starts

A steady 15kt sea breeze started to fill in on the beat to Bench Head ,with both Geronimo and Monkey Business now showing their pace and recovering from their poor starts to overtake McGregor III and Aloha.

Mid-fleet, Rocket was battling with Dan Dare, closely chased by Evolution  and Soprano.

2 comfortable fetches to the North Eagle, saw little changing in race positions with Gernonimo leading, Monkey Business getting ahead of McGregor III, and Aloha dropping back a little. Nice Tri was having its usual variable performance to windward appearing in the leading group at various times.

6,10,3,12 on the way home saw plenty of spinnakers skills, Easi Rider having a few spinnaker issues enroute to No 6 and Soprano lost 20 mins unable to drop her spinnaker after No 6

A steady sea breeze stayed for the rest of the race with a perfect spinnaker reach to the finish in 16kts, flat water and solid sunshine.